bioRe cotton is organic cotton coming from the bioRe Project, currently functioning in India and Tanzania.
bioRe Project is known globally as a leading large-scale visionary project and has received many international awards for its achievement.
We have been a member of this project since 2001, and introduced bioRe cotton to Japan.

The bioRe Project was started by the Swiss company Remei AG,
which established the foundations in India in 1991, and Tanzania in 1994. 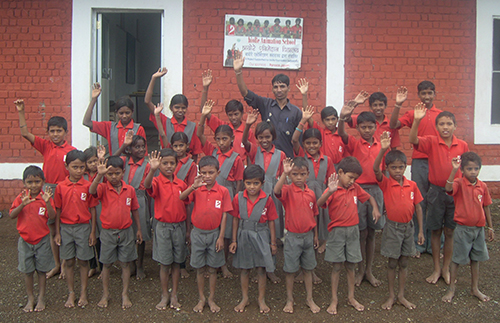 As a part of CSR (Corporate Social Responsibility), we are involved with the “bioRe Project” since 2007.
This project was started by the Swiss company REMEI AG, to produce organic cotton, in addition to creating activities ranging from providing trainings of organic farming, education for children, building infrastructure of healthcare and clean water, financial aid for engagement in agriculture, and contributing to independent women initiatives.

We are engaged in providing financial support for children's educational projects in India (establishment and operation of the Animation School) and the project for securing clean water resources (drilling and maintenance of wells) in Tanzania.

This Animation School opened in August 2007. Initially, classes were held in the home of Laisinghs, a registered bioRe farmer,
but the school building was finally completed in November 2010.
Panoco supports the construction and operating costs of the school.

■Location and Background
This settlement is located in the rural area of Barwani district.
The Animation School was started here in August of 2007.
There is a public school nearby, however during the rainy season, flooding prevents children from going to school. The Animation School is located about 60 km from the bioRe Training Center.

■Children
Classes are available from preschool to 5 th year, with 18 children enrolled when the school opened.
Today, more children have graduated.

■Health Examination
A health exam is conducted twice a year.

■Current Events
The school building, which had been eagerly anticipated, was completed successfully.
The grand opening of the school was held on November 26, 2010, and was celebrated by all the villagers as if it were a festival.

Each year, Biore donates funds for the construction of wells in the villages of Mwanyahina and Mwamishali in Tanzania.

In many areas of Tanzania, water sources run out during the dry season and people have to travel for hours to fetch water from far away.
Fetching water is mainly the work of women and children, and children lose time from their classes.

The wells are also of great importance for the children's future. In addition, local residents will also be involved in the construction work. The bioRe Foundation takes the lead in the work and all maintenance after completion is handed over to the residents.